On the Road in Sri Lanka – By Wendy Petersen

This experience, drinking a fresh coconut that was plucked from the tree beside our car had me thinking that it doesn’t get much more ‘organic’ than this. As I was crawling into the back-seat of our car, our driver, Prem, pointed out something to my mom and me.  One of the trees beside the car had white streaks coming down it, out of the bark. 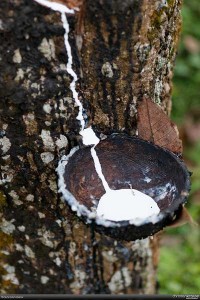 Prem reached over and took some of the white stuff off the tree. Immediately the tree started to produce the white liquidy-stuff where Prem had just removed a piece. The best way I can describe it “re-filling itself” is like a hang nail that starts to bleed, so you put a small tissue on it, but as soon as you remove the tissue, the blood starts to ooze out again. It was like that, with this rubber tree. You could pull the rubber off in long streaks, and as soon as it was removed, the tree started to reproduce the white stuff. It’s not sticky, though it is slightly wet. It’s rubbery. It smells like rubber – that stinky smell. It left my fingers smelling like I worked in a tire shop.

I had no idea rubber grew on trees. I was in slight disbelief that rubber grew on trees. Up until this point, I assumed rubber was a man-made substance, like plastic. Rubber grows on rubber trees like hair grows on mammals. Who knew? This is one of those eye opening experiences that I never would have had if it weren’t for travelling.