On the Road in Sri Lanka, by Wendy Petersen

While taking a day trip to Sigiriya Rock Fortress, an ancient palace in Sri Lanka, our driver, Prem, who had been with us all week, stopped the car for a small break. My mom, Prem and I got out and walked over to the coconut stand, where we purchased a refreshing drink for about $.50.

Our drink came in the form of a raw coconut that had been plucked from the tree above us. My mom and I each picked out which coconut looked the best, and the owner of the stand used a machete to chop the top off, and stick a straw in the hard hollow fruit. It did not taste like coconut in the states. It was not sugary. It tasted slightly sweet, and earthy. 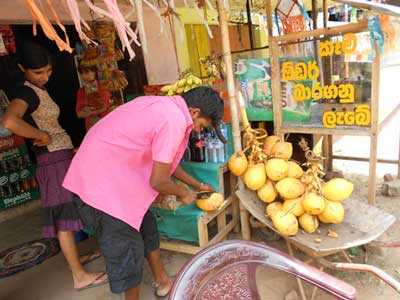 When we finished drinking the fresh coconut water, which, by the way, is now mass produced and sold here in America as a super hydrating beverage, the same owner of the stand took our coconut and, using the same machete, chopped it in half. He carved a small chip out of the hard shell for us to use as a spoon, and we used that to scrape the inside layer of the coconut as a snack. We didn’t know what he was doing, of course, and had to be shown how to eat a raw coconut!

When we were finished drinking and eating our coconut, I wasn’t sure what to do with the ‘garbage’. The owner pointed to the corner of the stand. There was a heap of cast away shell husks – we were to toss ours there too. Since the shell was 100% organic, I had no issues with my coconut joining its retired team. I stuck the straw in my purse for when a ‘real’ garbage can surfaced.